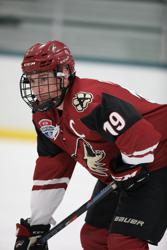 The Jr. Coyotes Elite Program is very pleased to announce that forward Josh Doan has selected Arizona State Hockey for his NCAA college commitment. Josh has spent his entire youth hockey career with the Jr. Coyotes, beginning with participating as a child in the Ice Den’s Learn To Skate program. Doan has been a fixture as the team’s “C” for numerous seasons and has always been one of the top scorers. Last season he was near the top of the team charts again, blasting 41 goals in 54 games overall.

Along with Matthew Knies (U Of Minnesota commit), Doan has been the key cog of a very talented group of local Arizona boys who have earned participation in 3-consecutive Tier 1 USA Hockey National Championship tournaments.(16U-15U-14U)

Doan will begin his NCAA hockey journey in Tempe with Head Coach Greg Powers during the 2021-2022 college hockey season. His plan is to graduate high school next year while playing junior hockey in the USHL with the Chicago Steel.

The Jr. Coyotes staff, former coaches and all his teammates congratulate Josh on his exciting announcement!