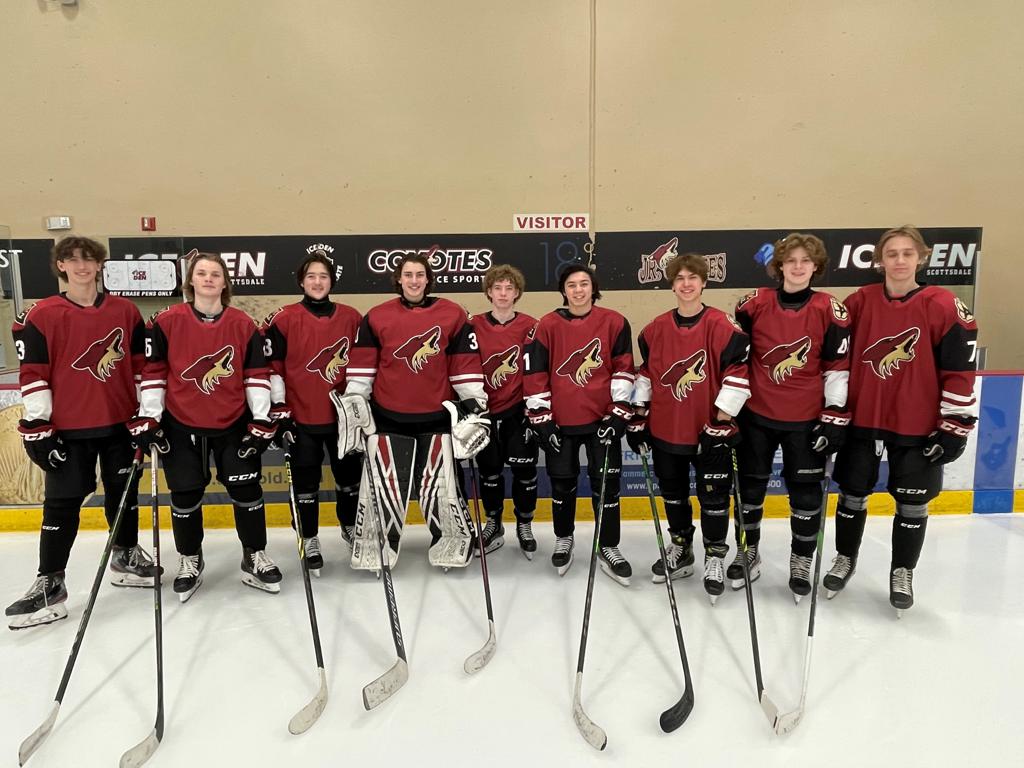 The CAHA Tier I Program is proud to announce that seven (7) players were selected Dec 8th in the Western Hockey League’s (WHL) initial U.S. draft for 2006 born skaters. The following day, the Jr. Coyotes were rewarded again as two (2) additional players were selected in the WHL’s larger Prospects Draft that included the Canadian born players. All CAHA draft picks are members of the 15O team that is currently ranked #14 in the country. Players eligible for both drafts were only 2006-born skaters that would be considered high level talented players on Midget AAA teams in the western side of the U.S and Canada.

(F) Jack Lackas led off for the Coyotes by being the 2nd overall pick chosen by the Lethbridge Hurricanes in the US Draft Wednesday. Soon after with the 9th pick, Victoria Royals nabbed (D) Hudson Bjornson, while Regina captured (F) Carson McGinley at #12. (F) Hayden Hastings and (G) Ben Vatis rounded out the first round by being selected by Kelowna Rockets and Medicine Hat Tigers, respectively.

In the second round, the Jr. Coyotes continued to roll with (F) Jacob Solano chosen by Kelowna Rockets at #30 and (D) Sam Webster selected by the Kamloops Blazers at #35. See the full final US Draft Results by clicking here:
https://whl.ca/article/western-hockey-league-completes-2021-u-s-priority-draft

The following day the WHL conducted their regular Prospects Draft for any players in North American. (D) Zakhar Meshcheriakov led the way for the program on Day 2 by being selected by the Tri-City Americans in the 8th round. (D) Drew Peterson rounded out the Jr. Coyote picks by being chosen by Prince George Cougars soon after.
https://whl.ca/article/western-hockey-league-completes-2021-prospects-draft

The WHL is a Canadian based junior league and offers an alternative direction to high level hockey vs the American based USHL and NCAA path. Many former Jr. Coyotes have been fortunate enough to play for teams in the WHL including recent Jr. Coyote Alumni Ty Nash, Oren Shtrom, Jake Johnson, Colton Langkow and Jay Lipinski. https://whl.ca/standings/275/conference/. The WHL will typically only draft bantam aged players each May, but staged this rare mid-season event because of COVID postponement last spring.

The very proud Jr. Coyotes program would like to congratulate all players taken this year in the WHL’s Prospects Drafts. We wish each continued success the rest of the season and look forward to more positive news coming to the program later this winter.